Developers are the rarest of the four profiles. Only 6% of people in our database are single-preference Developers.

People often say they find the whole concept of “Developer” a little hard to grasp. So Developers, this article is for you.

The other profiles are pretty straightforward:

Developers? They like to plan and optimize solutions. What does that mean?

In a recent FourSight training, we asked a lone Developer, “What’s it like to be a Developer?!” She thought for a moment, then she said, “When I was in high school I was in the marching band. After school, I would go home and, for fun, I would sit on my bed and choreograph the march.” She would think of the overall patterns, and then plan out, to the step, where the drummers and trombone players and flutists should go, and at what precise point in the music they should turn. The rest of the training class sat in stunned silence until someone said, “Wow, that is not what I would do for fun. That makes my brain hurt.”

Her story describes a Developer in action. Developers like to craft intricate solutions that incorporate the whole system and anticipate the exact moves that need to be made to produce a perfect outcome.

Between ideas and action

Developers bridge the gap between an idea and its execution. They live in the cognitive zone between the “Aha!” and “Just do it!” Like Clarifiers, they are analytical; however, where Clarifiers use analysis to understand “what is” Developers use their formidable powers of analysis to formulate “what might be.” They are drawn to the challenge of architecting a solution, optimizing every detail and creating a blueprint that, if executed, will produce an elegant, seamless solution. As problem solvers, they are attracted to complexity, willing to turn over and examine every permutation and combination of the solution, ironing out every last kink in the plan. Before anyone takes action, Developers want to be sure all of the bugs, shortcomings, and possible issues have been thought through and worked out. Paraphrasing an old adage from Henry Ford, Developers believe every minute of action should be preceded by an hour of contemplative reflection. During this period of reflection Developers are likely to be running mental simulations to ensure the success of the future activity, action or solution. For this reason, Developers show up as reflective, cautious, pragmatic, structured, planful, sincere and earnest.

Perhaps, the most straightforward description of the Developer profile is:

The tendency to want to get things right can be both a blessing and a curse. On the positive side, when Developers have the “time” to work through an idea before implementation, you can be sure that idea has been refined and is ready to go live. In short, Developers provide the necessary incubation time for an idea to come to full gestation. However, as perfectionists Developers can always see room for improvement. Thus, they might either be reluctant to let go of an idea or feel that they never have sufficient “time” to refine an idea. As a recent Developer lamented, “I can’t help myself, I’m often working well past midnight on the slide deck for that morning’s presentation.”

Where are the Developers?

In organizations, they cluster in specific areas. High Developers are attracted to jobs that require analysis and precision. Where low Developers might be at home with “trial and error,” “learn by doing” or “guess and check” methods, people with high developing tendencies go deep into solutions and strongly prefer to get things exactly right the first time. It’s no surprise that FourSight’s demographic database of profiles shows so many engineers, IT professionals and financial analysts with a high preference for developing.

Because of the scarcity of Developers, many teams we work with show a shortfall on developing energy. When it’s time to develop a solution, use the description below to think like a Developer.

When you’re working with a Developer, remember what they need to do their best work: 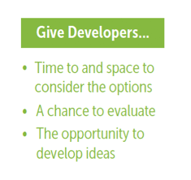 Sarah Thurber, managing partner at FourSight and author of The Secret of the Highly Creative Thinker, and Gerard Puccio, PhD, author of the FourSight Thinking Profile, collaborated on this article.